It's been a long, long time since I felt the need to go line-by-line through a China/Taiwan piece pointing out everything that was wrong with it. But sometimes you read something and just want to really rip on it.

Ladies and gentlemen, I give you this recent article published on the Forbes website entitled "Three Advantages China Has Over Taiwan". Let's start with the first advantage -

As my good friend the Writing Baron often points out, Taiwan no longer uses Wade-Giles and (with the some exception of "grandfathered-in" place names or people's names) hasn't for a number of years. Hanyu Pinyin is actually the official Romanisation system used by the Taiwanese government, though other systems (e.g., Tongyong Pinyin) are used outside Taipei. the real problem here is not that Taiwan uses Wade-Giles (if they did, and used it consistently, this wouldn't be such a problem) but that a number of different systems are used, and that, since they aren't used in Chinese-language learning in Taiwanese schools, most people aren't very familiar with them.

Moving on to the second advantage:

"In China, you can order a pot of local tea from park vendors or in teahouses, a rarity in modern Taiwan."

This one is a real head-scratcher for me - has Ralph Jennings (the author of this piece) really not hung out in Taiwanese tea houses? There's plenty of them, for the good reason that Taiwan is internationally renowned amongst tea experts as a source of quality green teas (believe me, I've spoke to a few and this is the first thing they say about Taiwan). I had the same feeling on reading this passage:

"In Taiwan, the Chinese-style sit-down restaurant with a multi-paged menu and plush seats smacks of special occasions. In Chinese cities, those full-scale restaurants are common and affordable"

Maybe Jenning's definition of "affordable" is different to mine, but even on a TEFL teacher's salary back in 2001 I was eating out regularly at exactly this sort of restaurant and still do every time I go back to Taiwan. Meanwhile plenty of Chinese families find it difficult to afford to eat out because China is still a very poor country.

The last "advantage" is a real doozy:

"You can stride down most sidewalks of Chinese cities without banging into things (despite the odd illegally parked car). In Taiwan, pedestrians yaw from side to side and watch underfoot to avoid objects stored on sidewalks. They should mind ad-hoc vendors and stored kitchen equipment, for example. In China, code enforcers known as the “chengguan” allow less occupation of public spaces, especially tight ones. You see newspaper and snack stands but they don’t cause clog and you see little else."

It's hard to know where to start with this one because it's so incredibly wrong. Maybe I should start with the shanty towns you find springing up to house the migrants who come into the big cities in China to work on building sites and so forth? Or perhaps the street hawkers that are ubiquitous outside all but the biggest city centres? Or perhaps note the simple fact that the Chengguan are renowned for their willingness to take a little cash to look the other way?

Nah, instead I'll just invite you to have a look at this picture: 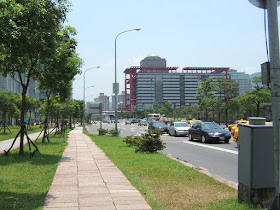 This is taken in the Xinyi district in central Taipei - notice how it doesn't at all resemble Jenning's description? Jennings appears to have gone to (at most) a few of the big city-centres in mainland China and drawn a comparison directly from what he found there to the typical Taiwanese street, but the real comparison should be between second and third-tier cities (many of which still have larger populations than Taipei) and their Taiwanese equivalents - but in that case there would be no contest, Taiwan would win hands-down.

You can post anonymously, but please enter a handle so we can distinguish your comments from those of other anonymous commenters. Comments will be moderated.